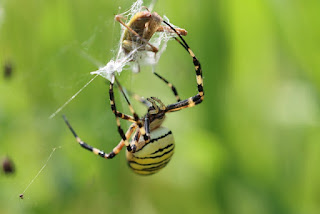 Trophic Levels in the Food Chain

The lowest first trophic level is the producer. Producers in the food chain are organisms that can produce their own food substances. Organisms that are able to do this are autotrophs or green plants. Also read: How Plants Protect Themselves.

The third trophic level is decomposers or decomposers and even called scavengers (detritivores). Decomposers are organisms that break down organic matter from dead plants or animal carcasses into inorganic materials. Decomposers will return nutrients to the soil to be used by autotrophic organisms to carry out photosynthesis. Also read: Characteristics of Ferns.

You need to know that the scientist from Arabia named Al-Jahiz was the first to introduce the food chain in the 9th century. Then in 1927 a British zoologist and animal ecologist named Charles Sutherland Elton again popularized the food chain. Based on its development, the food chain is then divided into two basic types, namely:

Grazing food chain or grass food chain is a food chain that starts from plants in the first trophic.

Detritus food chain or food chain detritus / side is a food chain that starts from detritivores or scavengers or decomposers.

Example of a Food Chain

For more details, consider various examples of food chains that have been summarized by ecosystem:

1. Food Chain on the Lake

Lakes are aquatic ecosystems that are formed naturally just like seas and rivers, although now there are man-made lakes called reservoirs. The lake is included in the category of ecosystems with calm water (lentik ecosystem). (Also read: Types of Symbiosis)

An example of a food chain in a lake is as follows:

2. Food Chain in the Desert

Organisms in the desert have different adaptations and are few in number compared to organisms in other ecosystems because deserts have limited water, heat and dryness.

An example of a food chain in a desert is as follows:

3. The Food Chain in the Forest

food chain In general, the food chain in the forest is very complex because it has a very large variety of biodiversity. For example in the picture on the side, it can be seen that there is a cycle of the food chain.

In the food chain above, the first trophic is occupied by grasses as producers. Grass that acts as a producer is eaten by grasshoppers. Grasshoppers which are herbivores mean that they act as primary consumers at the second trophic level. Grasshoppers will be eaten by frogs who act as secondary consumers. (Also read: Characteristics of Closed Seed Plants)

Then the frog will be eaten by snakes who occupy the position as tertiary consumers. The apex consumers are occupied by eagles that eat snakes. When the eagle dies, the fungi that act as decomposers will break it down into nutrients that can be used by plants to grow and this is where the food chain cycle will repeat itself. So the food chain described is Grass – Grasshopper – Frog – Snake – Eagle – Mushroom

4. Food Chain in the Ocean

The sea is a marine ecosystem with very wide waters and high salt content. Like forests, the sea has a rich variety of organisms that make it a habitat, so it's no wonder the sea has a complex food chain.

An example of a food chain in the ocean is as follows:

Top consumers or tertiary consumers who are carnivores and no other animal will eat them, namely killer whales. Whales will eat seals then when they die, the whales will decompose and be broken down by microorganisms. (Also Read: Animal Grouping)